- May 25, 2012
This weeks blog could be short. I did too much and I was shattered, it would read. I agree not exciting . It could also be a theme of accepting the impact my recent diagnosis has had and that this year needs to be the one where I prioritise my recovery. Two health care professionals  have said this to me this week.I had to stifle my reply which would instinctively be a big fat NO...not the whole year...I want it over now! But  I know its true and it doesn't mean I am not going to be working etc but just that I still need to make time to finish my treatment. And I need to stop trying to work it around my work diary, because the time will never be right if I try to do that. In a week when I met my London colleagues in Edinburgh it highlighted my pull. I work with great people, in a great charity, all of us passionate about our mission.....and I miss them. And the daily challenge of an interesting job. Briefly I considered asking to join them at a meeting the next day but recognised the danger in that so instead I attended to my needs and joined a mindfulness class. How valuable that was. I have long been an advocate of mindfulness not just in health but as a healthy tool for organisations , individuals, even governments. Alongside my study of gestalt it has helped me notice more and understand that I have choices about what to engage with. But I guess under stress is when I , like us all ,can lose that balance and default to older habits. So this week I am mindfully noticing my inner struggle but setting it aside and not letting it dominate. I am also mindful of my inner voice which when it says push yourself...and instead try to work with my energy, not against it. A small breakthrough maybe! The other impact of a mindfulness session is feeling less of that bone weary tiredness that's lurks around corners for me just now. I have an app for Mindfulness and do recommend it if you have a suitable device. It's easier to be shown in person first but it's a great tool to support mindful practice. It leads me to reflect that social media can be both a friend of mindful, reflective practice but I suspect an enemy too, filling the head with information and risking no space for reflection. One of the debates I saw and did reflect on this week was the potential paradox of a drive to independence in Scotland at a time of global economic crisis. Madness some would cry at such a time, whilst others argue that all the more reason to have influence over your own destiny and belief in your countries resources in all its hues. I wonder too if there is a similarity in the work we have done into how important it is to our supporters in Scotland that we fund research based here. Now we all know that research has the power to save lives across the globe so surely it's base is irrelevant? And of course that is recognised but so is the sense of pride that the research done here in Breakthrough Breast Cancer in Scotland is world class and impacts across many boundaries. I wonder if indeed they are paradoxes but perhaps more two sides of the same coin, recognising and valuing interconnectedness as well as respecting the cultural, national and geographical context. Both important, both our reality.  Reasons to be cheerful. It's not only been a mindful week but it's a music full one too. We saw the Firebugs at the local folk club and they were so good. Hearing my son, his girlfriend and his good friends sing and play their own songs with such talent and commitment is so uplifting. You can google and Facebook them and find their new EP. You can also see two of them running in the Edinburgh Marathon at the weekend supporting Breakthrough Breast Cancer:-) Listening to them inspired me to listen to some folk /americana tunes at home. Listening to Alison Kraus sing the beautiful "dimming of the day" moved me to tears , bringing to mind a lovely family we care about who are struggling too with a recent cancer diagnosis. Such a hard time for them. Music is always such a powerful way to connect with emotions. And tomorrow we go to see Tosca, a birthday celebration for my husband. It's ,as always , so important to savour and celebrate the good times. I hope you have some planned too.

The tentacles of Covid 19 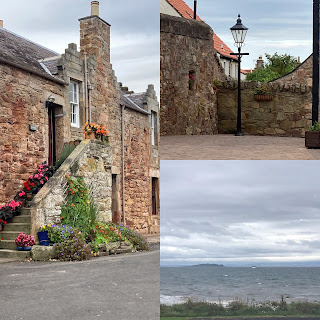 Crail, East Neuk of Fife   There is a sadness in our home just now. An old friend has died very unexpectedly and he’s with us, in our desire to have said goodbye, to have hugged him when we saw him last. His wife is also very ill but the curse of visiting restrictions means we haven’t seen her at all. Will this awful virus never lose its tentacles on our so vulnerable lives. A friend dying unhugged or unseen is a loss unaccounted for in the daily tally. Or a family member, locked down in a care home; again unseen and unhugged. Locked down, even the words make me shiver. And when the home developed a system to see family members, it was through a Perspex screen, accompanied by a carer and communication was through a phone. The similarities to prison life not lost on anyone. And what is their offence? It’s getting frail, older and to become the unseen; protected from viruses and hidden from life. For a time the families’ rebel
Read more 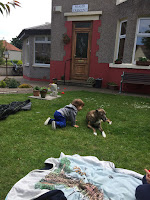 I’m realising my life has become two dimensional and since the weathers changed, also a bit grey.  Till now I’ve been content to be in the house and garden. I’ve managed to get some sun and even have lunch outside. I’ve listened to bird song and enjoyed seeing the flowers come out in our garden.  But it’s joyful to see the family in the garden. The activity of our grandson is entertainment itself and life so full of discovery. Cara and Davie are becoming sound friends. Yesterday they sat together and Davie realised the fun of feeding the dog all your food, even as Mum says no. Especially as the dog then tickles your hand as she licks it off. He was in a kink giggling and Cara was living her dream. We laughed so much it was impossible to stop the dog or Davie. Social distancing is not in their lexicon.  For me social distancing means I have to sit to one side of life. I realise I’m sort of seeing it through a lense thats greyed off. Only Davie beyond the household has breached the di
Read more

No vaccine for compassion. 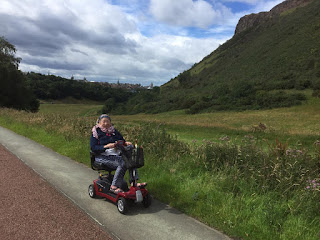 Up Arthur’s Seat in Edinburgh  Today , in Scotland, shielding ends. If you are reading this in the future I don’t know if you can really appreciate the importance of this for some people. As I wasn’t properly shielding ( no letter for me) but being very careful, I’ve been a bit more mobile in the last couple of weeks. But I remain very cautious. It’s a bit like a slow motion Hokey Cokey without the fun. I’m back as quick as I’m out and I relax only once I get through the door. It will be so hard for people until they gain confidence. I’ve lost some mobility, perhaps that would have happened anyway, but it’s making stairs harder. And so another bit of independence is eroded. COVID-19 is shaping the advice against taking holidays abroad. For us it would feel a mountain to climb to holiday abroad on our own anyway. We’re planning a trip to the north of England  to see my much loved sister-in-law and I’m fearful as the numbers slowly rise around there.  I want to parachute in an
Read more