" I cant go back to yesterday because I was a different person then."

It's all been about women's voices this week. But more importantly than that its been about really hearing them too. As Co- Chair of the Scottish National Action Plan on Human Rights for Health and Social Care I heard the voice of Pam DuncanGlancy explaining why the role of health and social care is about more than providing care, it's about enabling people to live fulfilling lives, however they define that. Thank goodness for active citizens like Pam who articulately challenge us all, on behalf of so many. 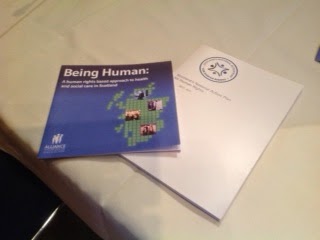 I also heard my own Mum take part in a workshop ( its a long story and well done to the compassionate folk of Argyll and Bute Council, NHS and voluntary sector for enabling this). She had joined me on a wonderfully scenic road trip and then came along to meeting I was facilitating, to enable the creation of a person-centred network. Her fragility was evident in every respect but her welcome was warm. She was included and that was enough for me, but when she spoke up at one stage she said, it's important not to treat everyone the same because we are all different. We all heard her loudly. She understood much more than even I had realised and spoke a very important truth for her. It was moving and thought provoking. How rarely someone like Mum would be involved in shaping care for her and others. How often would we assume an inability to engage? I expect we need to learn new skills, patience and methodologies to enable this. We know music awakens engagement, what else is the key or maybe it's simply listening? IRISS have reported research in the Arts and Social Care so maybe the answers lie there?


And for me it allowed me to be fully myself in the workshop. I joked it was a bring your Mum to work day but for me it was bringing my whole self, the daughter, the temporary carer, the professional using yet another form of lived experience to inform my expertise. And what's more we all enjoyed it...in fact they have said to bring her every time but that would be a long way from her own home in England so definitely  not realistic, but deeply kind. Somehow I suspect she will have left her legacy to this network of committed people, it's such an honour to work with them.


The women who joined us at the Scotland's Future Women's Voices event were absolutely fabulous. They questioned, they listened to each other, they learned from each other, they challenged politicians, and they were respectful, intelligent in their expressed concerns. Everyone managed to avoid any tribal politics and made their cases for the issues that mattered to them. I loved every minute of the discussion. There was every age from school children to retired people and if there was any doubt about women being interested in the constitutional debate, there can be none now. As Nicola Sturgeon the Deputy First Minister sat down at our table she was challenged by a range of viewpoints and age groups, it is democracy in action when a school girl can question a government minister. She and Sarah Boyack MSP both acknowledged that parliaments would look very different if they were full of women and that we need to redress the balance more in the future. 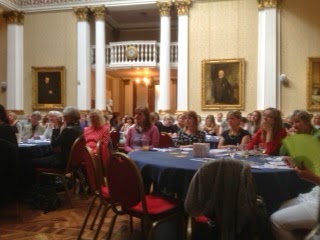 The final cry as they reluctantly left was, “let’s do this again”. Clare Logie Allan and I launched a women's collective that evening called; Scotland's Future: Women through the Looking Glass. You can follow us on twitter @ScotLkgGlass;  we had planned our first event after the referendum but maybe we need one sooner? The women are engaged now and what's important is that as we approach perhaps the most important vote in our lives we are as informed as possible. 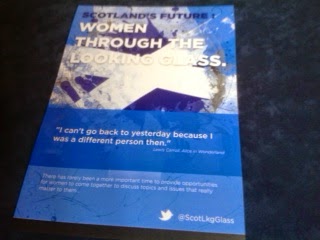 I'm increasingly convinced that the road to health for people, communities and nations is their level of involvement in the main decisions that affect them.This political time in Scotland is engaging people in a way i have never seen before. Its changing us-we wont go back I hope. Self- management, engagement and involvement, self- determination or participative democracy are at the core of health and wellbeing I suspect. It does shift power bases at every level. And seeing all of those voices in action this week I'm absolutely sure everyone gains. 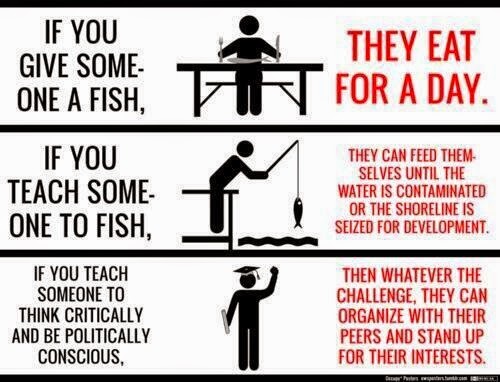 Reasons to be cheerful.


It's been a family filled week. Not least the last minute chance to see Robbie Williams with my daughter. As many of you will know my musical tastes aren't normally in the pop genre but it was the ambiguously named Swings both Ways tour and it was great entertainment. Singing along to Angels with Catriona was the definite highlight. The selfie says it all! 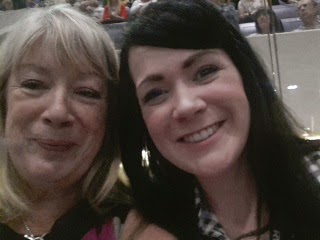