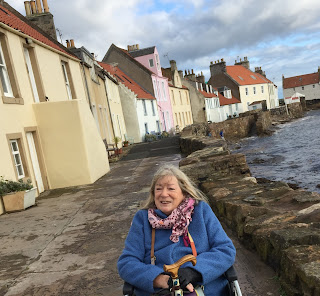 So last Friday-just before Christmas- I got this letter. Your PiP ( personal independence payments) has been stopped, you owe us money, your car will be returned.......
It hit me like a steam train, one with a snow plow on the front that brutally scoops you up and throws you off the tracks. That takes your breath completely away. I panicked, my breath hard to catch, my pulse racing, my mind unable to make sense of it, I started to sob. But how? I tried to read it more closely this time. I gave it to Andrew to try to make sense as well. It seems I didn’t return the form. But I did, I sent it off in good time ( you get threatening letters about being late with the form) but this letter said differently. I was shaking, trying to read and make sense whilst attempting to calm a racing brain. I went online to read about when your form hasn’t been returned. I finally found a phone number and called. It was Friday evening but it seemed, if I waited I could speak to someone. I waited, I drank tea and waited. After sometime a man answered. I told him,voice shaking, and emotions spilling over, I explained about the letter but that I had sent it in within the deadline. ‘I know what’s happened’ he explained. ‘Our mail is 2-3 weeks behind opening and registering on the system. So don’t won’t worry this is a standard letter that goes out and we have no control over that. Really? Really? ‘So just ignore the letter, i can see your form is with the case manager and once it’s been assessed you will hear from them.’ ‘So this is your fault but I get this letter which caused me so much distress?’ We went round that loop a few times till I was reassured then I hung up and tried to calm down. And I thought that was it until I heard about the assessment. But no on Monday I got a call from PiP as apparently I had requested a call back, I hadn’t but I’m glad I got one as it seemed that although I had done NOTHING WRONG my money had been stopped until the assessment was done. That might take eight weeks. Because the letter was sent this was the process. I reinforced I wasn’t at fault ad nauseum and finally I asked to speak case manager. Again I waited and finally she returned and said they had reinstated my money and my case would be reviewed as normal.
I have shown the letter to family and friends who share my shock at the brutality of it. One friend, seriously suggested it should have Samaritans phone number on it. Thats the impact, it’s designed to put people off from the start. A guilty of fraud until proven innocent. It’s shameful, this is supposed to be our welfare state, the safety net when times get tough.
And for people who don’t know my story, I have a benign growth on my spine that means I can only walk with assistance for a few steps, I have constant pain day and night, I need support with most things AND I have recently had treatment for the fourth time, with breast cancer. I’m awaiting preventive surgery next week to add to the mix. I’ve gradually had to give up full time work and recently had to dramatically reduce the work I can do. I continue to do work I love, partcularly coaching as it reminds me of who I am and the difference I can make. The PiP in many ways enables me to do that and pays for the many extra costs that disability creates.
I’m sharing this now, not for your sympathy but because we are in the last week of an election campaign and I hope that if you are unsure what to vote, this will help to persuade you to give your vote to someone who has pledged to create a more equal and supportive society, someone you can trust with our NHS, our pensions, our welfare state. The post war Britain that prioritised caring for its citizens is on its knees and it’s people like me who are paying the price. If you think getting Brexit done is more important than creating a society that lifts its people up, rather than pushing them under then maybe you’ve stopped reading already, but if not please re think. If you want a society where all citizens thrive and contribute then choose wisely who to vote for. This is a pivotal time in our country, each of our votes can change the future.


Because what has happened to me, could happen to anyone and you too could feel the cold fear of abandonment from a welfare system that’s in the fifth richest country in the world.