the lonely planet are right...


It's one of those weeks when I am reminded of the beautiful country I live in. And let's be honest the beauty of the people too. I set off at the beginning of the week to fly to one of the Scottish islands. The flight was from Oban airport which has to have one of the best views from any airport lounge. There was a variety of planes on the Tarmac but I was relived to know mine was the slightly larger yellow one! Now I was already a little nervous but paradoxically that anxiety increased as the pilot explained the safety procedures and peaked as she said to me, tighten that seat-belt there isn't much headroom as we fly over the high mountains. Now in case you think I'm of Amazonian proportions I'm actually 5ft 2 ish. So I guess the back of the plane is for wee folk! But frankly it was the only moment my stomach lurched. 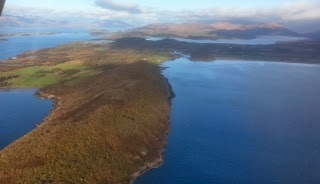 The flight was spectacular. On the drive there I had passed snow capped mountains ( first proper snows of the year) and the colours of autumn spectacular around every bend. But the flight was the final icing on the cake. Blue and green sea was spread out below us with so many islands scattered through it. I spotted the Paps of Jura in the south and the Isle of Skye to the north. We flew over the mountains of Mull too. Recently Lonely Planet described Scotland as the 3rd best place to visit in the world. I have long believed this but after my recent travels I defy anyone to disagree. I had left the beauty of Edinburgh sparkling in the frost and arrived in the spectacular Inner Hebrides within 4 hours.

Having worked in Argyll before I know it's beauty and the challenge too of providing equitable services for its citizens. The island communities do accept that they have to be flexible in their lives, they don't ask for the undeliverable, they acknowledge their situations but nonetheless they pay a price at times for that. Illness knows no geographical boundaries and so the diagnosis of a serious illness or disability can have a huge impact. If you have a diagnosis of cancer , factoring in extensive travel for treatments like radiotherapy and chemotherapy can take their toll on not only the individual but their families too. And the likelihood of support groups, access to specialist nurses and so on may be very limited. But often they do have communities who step up and support. Something thats not available to mainland communities and organised services are no substitute for that, let's face it. But there is also an important need to have access to the right information so connecting these rural communities digitally is hugely important.

As I climbed into the plane I wondered how easy that is for the vulnerable of all ages. There are over 25 inhabited islands in Argyll alone and these communities have adapted over many centuries. One retired district nurse once told us the story of the first medical evacuation from one of the small islands. The plane ( a rare sight in the 1930s) was attempting to land to pick up the young person with appendicitis who had been brought to the airstrip ( or beach as we call it) but kept coming low and then flying off. On the third attempt a piece of paper was floated down to them. It said "move the car"!  A mistake they didn't repeat...

Reasons to be cheerful. I had a great trip to the inner Hebrides. And managed to avoid the bad weather this week for my flights. When you are on an island that wonderfully British habit of talking about the weather is a vital discussion. Ferries and flights cancelled make huge differences to these communities in a way us mainlanders can't imagine. Oh and the stars are simply amazing!Visit Scotland, you wont regret it.