Maybe its because I have most recently inhabited the breast cancer charity world ,when I hear the phrase pink and fluffy ,I come out in a rash-and not a pink and fluffy one either. Dressing any cancer diagnosis in pink does not mean it’s any less difficult to deal with and can hide the challenging reality. And so it is that when people talk about working with compassion, with integrity, with honesty and with respect as pink and fluffy,they seek to diminish its importance too. Somehow it’s not the real work, whereas spreadsheets, manifestos and business plans are seen as the tougher side of being in the real world of making things happen. But don't we all really know that what makes them stand or fall is based on relationships? It's the people stuff that is the factor that guarantees success or not, in business, in services, in life.

And how pink and fluffy is it really to commit to listen to others, to be in respectful relationships, to bring empathy rather than judgement to our dealings with others, to act with integrity in all our work? Who of us can say we have always got it right (not me I admit), who hasn't had to learn the hard way sometimes, who hasn't felt the impact of others not working in this way? I know the lessons that I have been learned from such experiences have been the tough, life changing ones. And definitely not pink and fluffy.

It's hard not to think in terms of war analogies when we are in such a time as now, when parliaments and senates are seeking approval to strike targets in Syria. So is there also a risk that rather than looking for the longer term goals of culture change we deploy some "targeted" cruise missiles ; we bring in some new regulations, we find some individuals to blame and we change little really. I heard the quote in parliament that "appeasement never achieves peace" but does war? What achieves change in the long run is deep listening and honest, respectful, empathic, flexible communications and actions shaped by the very people who matter.

If we want to achieve real change whether that's in health and social care, our wider communities or our nations it's the people stuff that will lead us there ultimately. Let's be man enough to embrace it and stop belittling it as pink and fluffy or I just might have to resort to even more antihistamines...... 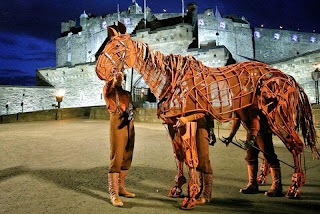 Reasons to be heartful. I see a real willingness to engage in those discussions about how to change things for the better. Even in the debate on Syria the division is not about whether we all care about the awful reality in that devastated land, it’s about how best to help. I truly hope we find the right answers soon.
The fireworks tonight in Edinburgh herald the end of the festival and in some ways the end of summer. I hope the weather holds out to allow both to go out in style. I leave you with a photo of the war horse in front of Edinburgh castle. Beautiful and strangely moving in the majesty of the creation and the setting.