This blog is a sort of confession, I'm a wee bit addicted to politics. I have grown up with a belief that democratic politics is a force to enable all of us to have a voice and even when I have at times lost faith I have still been drawn to the possibility of something better.
So this last two weeks have tipped me into a horrible crisis of addiction to news and social media. I have read everything I can to make sense of what has transpired in the UK since voting narrowly for leaving the EU. I have looked under every stone for a glimmer of hope of something better emerging. Now I'm Scottish so that glimmer of hope for me has been our First Minister who has shown a compassionate and strategic leadership that is outstanding and yes reassuring too.
But Westminster politics has left me breathless- literally! I will admit to a temptation ( ok I've given in to it at times) to kick back in the chair, open up the popcorn and marvel at the Machiavellian drama. But mostly I'm sickened by it. It's that behaviour which has led to this situation and it seems the answer to our awful situation is to behave even worse.
I'm sure there are those who mean well within the parties embroiled in internal warfare but those they have collectively let down are looking on in horror and fear. The roots of this decision to leave Europe go back decades; decades where a whole swathe of our population in the UK has been ignored at best, sacrificed at worst. This they believed was their opportunity to have their voice listened to and they took it. But is anyone listening to it? Not the so-called leaders of the “leave” campaign who have retreated into the cess pit of their own creation; leaving the rest of us looking on with something akin to despair and most certainly with disbelief. I can’t be alone in feeling overwhelmed.
And now the Chilcott Inquiry report delivers its verdict and my head is finally in my hands. I’ve tried to find ways to communicate my feelings but frankly I can’t find the words. No words are enough and anyway it’s a visceral loss; a grieving for a different time when the needs of people not neoliberal ideology shaped our decisions and for a time when the political elite in Westminster earned our respect and support.


Thankfully this weekend in Edinburgh there was a moment when we were able to believe in our better selves. This section of the First Minster’s speech helped me lift my head higher. She described a Scotland I could recognise and be proud of;

“We are the grandchildren and the great grandchildren of the thousands who came from Ireland to work in our shipyards and in our factories. We are the 80,000 Polish people, the 8,000 Lithuanians, the 7,000 each from France, Spain, Germany, Italy and Latvia. We are among the many from countries beyond our shores that we are so privileged to have living here amongst us.

“We are the more than half a million people born in England, Wales and Northern Ireland who have chosen to live here in Scotland. We are the thousands of European students studying at our universities and our colleges. We are the doctors and nurses from all across our continent and beyond who care for us daily in our National Health Service.

“Whether we have lived here for generations or are new Scots, from Europe, India, Pakistan, Africa and countries across the globe we are all of this and more. We are so much stronger for the diversity that shapes us. We are one Scotland and we are simply home to all of those who have chosen to live here. That is who and what we are.”

It’s tempting to resort to blame and anger at this time and I absolutely understand the impulse. But these are emotions that are not only destructive to the individual over time; they are destructive to reflection and learning; they are destructive within communities and they do not move things forward. Indeed the risk is that they leave us compounding the issues.
I have found myself revisiting this quote this last couple of weeks. And I share it with you now. In particular it reminds me that if we want to see a more compassionate world then we need to reach out with compassion and not judgement. The truly disruptive and transformative work we can do just now is to show compassion and consider as we do realign ourselves to transform things for the better; as Lao Tzu also said the best fighter is not angry. 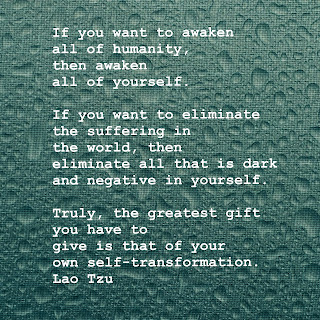