I burn but I am not consumed

By the end of the day of January 20, Inauguration Day, I recognised that the tightness in my chest and overwhelming feeling was caused by a visceral, overpowering fear. Of course I've been afraid before. I'm a mother; I've felt the fear of my children being hurt or lost or having their hearts broken and the million everyday fears that being a parent can throw up. I've also personally had the fear of waiting for results of tests for cancer and the even worse times when those fears are confirmed by the words "you have cancer". The worst fear for me with each diagnosis of cancer is the fear of hurting and not being there for my family and friends and especially for my children. So fear and I are old, maybe not friends, but acquaintances. I've learned to rationalise and help to find a way through those fears, even when some of them visit me in the middle of the night. And I recognise that one way I compensate is to savour every minute with those I love and store memories like precious gems tucked in my heart.


But this fear was a different one.I couldn't find a way to rationalise or minimise. I think I've only felt that similar fear when my children were very young and the Chernobyl nuclear disaster was unfolding. I was in the car with the radio on and I learned that there was a very real concern that day that the nuclear reactor was going to fully melt down, causing a disaster which would impact far and wide. I remember shaking and noticing the feeling deep in my core of an overwhelming fear. All my instincts told me this was really serious and there was absolutely nothing I could do to protect my children or my wider family? In that moment I felt too the the terror of families in close proximity; living a grim nightmare. Thirty years later I still remember that feeling.


So when I felt it again after the inauguration speech by Donald Trump I recognised it was the deep and visceral fear triggered by a sense of powerlessness and of impending doom. It was hearing the phrase "America First" that triggered it; the refrain and its delivery seemed to me resonant of fascism, just as calling out "Britain First" did when Jo Cox was murdered.  I felt sure the murder would stop us in our tracks, make us pull back. But no, instead we've witnessed a normalisation of beliefs that I find chilling.


Since the election of Trump I have been shocked, worried, completely bewildered but it wasn't until now that the reality of the shift to the far right seemed real. And I'm so afraid of the consequences.


It's why for me joining the Women's March movement felt so important. Seeing the energy, determination and love that was expressed I felt a sense of not just sisterhood but also of hope. The range of  ages there was especially encouraging......there is a new generation who will be prepared to rise up.

Thank goodness for that because we are going to need them. I absolutely believe as Gandhi said that the path of truth and love always wins but it may be that we have some hard lessons to learn on the way.


What we can do meantime is be the change we want to see and be willing always to speak the truth to power. And we need to ensure that love does indeed trump hate. 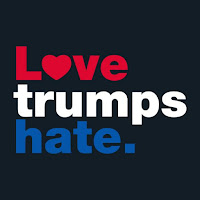 I leave the last word with Karine Polwart  who reminds us in her song for the occasion of the Inauguration of Donald Trump that his reign will pass and the rocks of the Isle of Lewis, the place of his mothers birth will remain untouched-they will burn but they will not be consumed.
http://www.bbc.co.uk/programmes/p04q5cmf