Is it accessible and holiday tales!

- September 04, 2019
It was right up to the wire, would I go on holiday? My wound from my mastectomy in May was still  open and had been infected. But at my final clinic visit before the planned flight I was pronounced good to go. So with EHIC ( good till October I guess?) and all sorts of medication and dressings off we went; airport assistance worked a treat and Jet 2 were excellent. As soon as I could I was in the pool. The only place I’m not in pain. I should have been a mermaid... My first day I was in three times. Hallelujah.
A few days days in I noticed a swelling at another part of the scar. F..............K! It burst and so began another round of antibiotics and an array of dresssings applied. My swimming days were reduced to paddling. I remained vigilant but 12 days in I was running out of antibiotics and another area of my scar was swollen and suspicious. I phoned the clinic in Edinburgh and they advised I see a health professional and see them AGAIN on my return.
We were in rural Bulgaria but have towns nearby and Varna in easy reach. My feeling as we sat in the waiting room of a small town, was maybe we should have gone to Varna? The building was circa 1950s with a hint of utilitarian totalitarianism. No doubt it was just the thing in its day and the lady carrying the mop in her square white coat spoke of a futile commitment to cleanliness. The chairs were worn and the burst plastic hinted at many generations who had sat quietly waiting their turn.
We were eighth. However we learned that children and pregnant women had priority. I waited in my mobility scooter and settled into acceptance as so many had before me.
In time we were hustled in to a room with a nurse wearing a mask. DOCTOR she annunciated as we asked about speaking English. Again we waited. The Doctor said of course to my query of speaking English. So I succinctly explained, he asked to look. A solution was found and prescription written for a silver spray and antibiotics until I was back at my clinic. This all took about 60 seconds. He was from the “do what I tell you and STFU” style of medicine!
How do I pay you, I asked? Cash. 20 leva. Ok, we handed over the equivalent of less than ten pounds and left through a throng of mothers and children. His day was not getting quieter.
The antibiotics cost 7 leva. The silver spray not available so we gave up. Total £13:50, I won’t be making a claim.
I was a health visitor in the UK in the 1980s and worked in similar places but none quite so neglected. But the residents were modern, stylish, helpful and keen to do right by their families. Bulgaria is in the EU but missed the boom before the bust. Our experience is so resonant of experiences in this very beautiful country. They are a resilient population and settle for so little. By contrast we seem so entitled. We in the UK rage against the EU at the same time as enjoying so many benefits, not least the interconnection and the peace.
But we have created a health service which has improved not only in infrastructure but in its involvement in decision making, in self management and in coordinated care. We’ve a long way to go but this experience made me grateful once more for the the skilled support I have-in a comfortable and respectful setting as well. It’s what we all deserve; especially the hard working, kind Bulgarians we have met over the years. 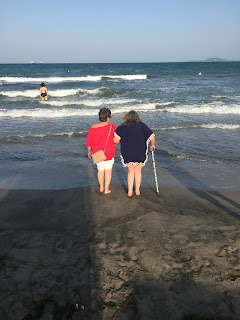 Who knows what will happen travelling after Brexit- if indeed it happens- but right now we are back, staying home feels very appealing. Travel and staying different places is so hard with a disability but it could be different if our society made accessibility a high priority. My daily fight with non-drop pavements and wheely bins suggests we’re a very long way from that!