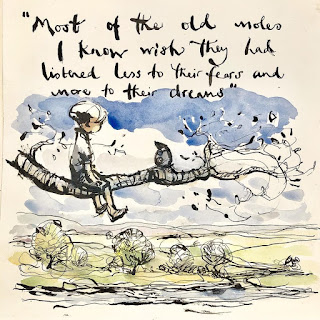 If I had worry beads, they would be down to the string just now. It’s not been an easy first half of the year. And I’m going to say straight away, I also know I’m very fortunate. I have so much that others start each day worrying about keeping. I don’t have to worry about finding a home or a job or even social isolation. But what we have had in the close family is a series of ill health, a horribly broken wrist and most recently covid has affected my grandson and his Mum and Dad. Thankfully we are on recovery paths now but it’s shaken us and also because it’s not been me who has been unwell for a change! Don’t get me wrong, I’ve a whole lot going on as ever but nothing unexpected or acute.

We humans are amazingly flexible and resilient but we are also vulnerable. Not only can our bodies let us down but so can our society. During lockdown we have seen so many people lose their jobs. This is not only about income but also about how we see ourselves and often our self esteem. It is estimated that one in three of us is only two pay days away from homelessness. In the US and England it’s one pay day. That’s how quickly our fortunes can change. And what was once a social security system in the UK is now a benefit system. We are not socially secure when things happen. Be it illness, unemployment, retirement or relationship breakdowns; our worlds are rocked and our income so affected to be life changing. So many are not secure and foodbanks have only appeared and grown exponentially since the benefit changes, in particular universal credit. This is to our shame as a society and has a huge impact on our economy too.

I really welcome the exploration of minimum income guarantee and universal basic income. We need more compassion in the system. And if voting behaviour is a sign, most people voted for quite fundamental change in society even setting aside the constitutional debate.

A National Care Service is one of them. Without a real concept of what that is, we know we need to see substantial improvement in our social care service. My generation has grown up with the NHS and for many they don’t understand where that ends and social care begins-until it affects them and their family. My husband is now my main carer. Friends and family do help when they can but in daily reality, it’s him. And recently he’s been unwell. I’ve felt guilty for my need and he’s felt overwhelmed too. We have got through but it’s left that residual worry. What would happen if…the if unsaid.

But the other day he raised ‘what would happen to you if I wasn’t here’. My first thought was he’s decided to run away! Who could blame him-second thought. Then reality settled on, he is thinking what if I died. Even to write that down triggers such anxiety and loss. My answer was I would pay as much as I could afford for care and get by. My inside thoughts were much more alarming. I would have more pain and anxiety. I would eat less well, I would be less well and I’d struggle to get out. I’d be unable to care for my dog without good support which would also be expensive. I’d be unable to work much at all unless it was all online. I would do what most disabled and frail people do; live a life compromised by a very poor or very expensive social care system.

So my reality is I want a national care service for us all, that we invest in through a national form of insurance. I don’t want my husband to be exhausted, afraid to be ill and afraid to die, because life has dealt us some tough hands. I don’t want to feel afraid of my future, I want to be able to live my best life now. It shouldn’t be too much to hope for, should it?