Borgen, Birgitte and......
One of the inventions I enjoy is the ability to record your favourite TV or films to watch when you want to. That ability to kick off the birkies , put up your feet and savour the delayed gratification that comes from saving the treat till the work is done cannot be overestimated. Of course if you are like me and also engage with twitter it's essential to avoid the live twitter feed if you have it on record. Spoilers abound but it's not that reason that the recent episodes of my biggest obsession- which of course is Borgen- have caused me distress. Oh no, it's the storyline of late.

As a political anorak of sorts, I admit my idea of a good night is watching Danish political drama with subtitles requiring my full attention. In fact one of the highlights of this year for me was watching the last two episodes of the of the last series at the Filmhouse in Edinburgh, followed by an interview with the actress , playing the states minister, herself. Believe me I wasn't the only person there with a bit of a girl crush on her.

Over the earlier series I have also ( like many women I guess) seen a little of myself in her dilemmas between family and a demanding career, the value bases challenged in a masculine culture, the inner idealist struggling with the paradox of power and powerlessness. But let’s be honest the similarities have been tenuous, she is younger, more glamorous, very eloquent and successful and she can wear high heels and power macs with more style than I have ever managed.

SPOILERS ALERT!!!
Of course this series has given us more in common. Her diagnosis of early breast cancer seemed to come out of the blue, not a classic lead up at all. ( How like life too...) So much so that the end of the episode she was diagnosed- left me unusually quiet. I then dreamed all night about her. Concerned that she got the support she needed, scared she made the same mistakes as me, if truthful. NO I wanted to shout, don't try to carry on, get support, allow yourself to be loved and held by those who care about you. It's hard enough, don't make it harder.   Of course I know she isn't real but I wanted to save her from herself. I wanted her to be wiser than me. I didn't want her to suffer more than she needed to.

But maybe for people like her and indeed for me the habit of pushing yourself to survive in a challenging world will also be something that kicks into play even when we know in our hearts it's not the solution; whatever the reason-but perhaps especially with illness. You know that to succeed as a woman  you usually have to do it all- but backwards in high heels as the Fred and Ginger analogy would have it. So if you add anything into the mix that smacks of weakness then in many parts of the working world the wolves circle, licking their lips. Of course it's not just that, we are also used to thinking first of our children or other family members , soldiering on whatever, wishing to protect them from pain and worry.

I confess my undoing was watching her children's reactions during last weeks episode.The hardest lesson I learned but still find hard to accept is that we just can't do that ;we can't protect those we love from things not under our control. But we can teach them how to look after themselves by trying to role model that ourselves. OK no prizes for that for me but it seems that like Birgitte I'm human too!

And so as she accepted the help, recognised her vulnerability, got cared for, her power returned, her roundness as a human being only enhancing her appeal. Let's  hope that continues. But there is still a plea from me. Lets not treat this health blip like she is just recovering from a cold. A cancer diagnosis, no matter how early, has an impact. In my role in Breakthrough, throughout my time as a nurse and now as a blogger and health advocate,I have heard the recurrent stories of those who wish people really understood the impact of cancer and that it doesn't end with treatment. In many ways that journey both psychological and physical is just starting. So I know Birgitte is a fictional character ( I do honestly!) and that the story is of people and politics, but if she shrugs off the cancer like a winter coat at the start of summer I will be pleased for her but then I really will know she isn't real. 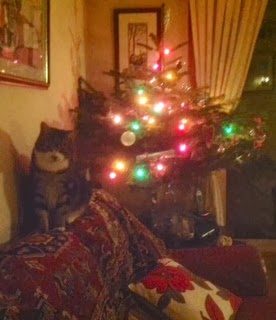 Reasons to grateful.
After a busy but hugely enjoyable spell I am now on wind down toward Christmas and most especially time with the family over the festive period. How enormously grateful I am for that.