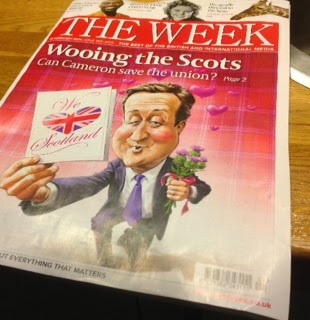 I will admit to the odd rant at the news this week. It's a heightened time in Scotland as we approach a referendum on independence so we are getting used to political posturing.  In this week alone we have had the prime minister asking the rest of the UK to love bomb the Scots to persuade them to stay in the Union. I won't take it personally but I have had a distinct lack of love bombs from the south. I'm sure ever rising flood plains are a much bigger issue for most and rightly so. It's been a terrible spell of relentless rain and a large dose of misery for many. The spring cannot come soon enough.
And then the chancellor arrived in my home town to tell us we can't have the pound if we vote Yes to independence. Whatever your voting intention you could be forgiven for thinking "but its our £ too". He didn't even stop for an Irn Bru.

But it wasn't that that made me lecture the newsreader. It was the pronouncement about the new procedures to focus on getting people back to work when they have been off for 4 weeks. Now I absolutely agree that returning to work is an important part of recovery and wellbeing so when people are well enough it's vital to get the support to get there.
But what about those who aren't well enough? What about people who are struggling to regain their health, whose emotional well-being is hard to measure but disabling nonetheless, who are living with long term conditions which mean a life with constant pain, breathlessness and so on? What of those on treatment for cancer: surgery, chemotherapy and radiotherapy the health depleting cocktail?
There is a recurrent rhetoric that people need to be encouraged back to work but interestingly our rate of absence through sickness is among the lowest in Europe and has halved over the past decades. So what is the problem we are trying to solve and even more importantly at what cost?
I have seen this dilemma from both sides of the consulting desk. As a nurse I would frequently be advising people not to go back to work too soon, having seen many a tentative recovery crumble under the pressures of work. My honest recollection is I have never thought someone was deliberately avoiding work, perhaps I'm just lucky or seriously naive. But I know from my own experience my drive was always to go back too soon. It's the thing that signals the illness or treatment is over, life is returning to normal and for most of us that's what we want. Some jobs lend themselves more to easing yourself back in, or to escape from the isolation of your sickbed-but not all.
I eventually realised that although my treatment was over, my stamina had slipped out the door, my mojo missing in action. As a charity director it was a wonderfully challenging and motivating role but it didn't have an off switch. I had no need for anyone to encourage me back to work, I needed them to wave a magic wand and help me get back my wellbeing over night. No one could of course. My last year, working independently, being able to give life a different pace has allowed that, practicing mindfulness has helped, taking part in The WEL course a turning point too. There are no magic wands just the knowledge, space and rest to care for yourself mind, body and spirit enables your health to return.
That doesn't happen by merely pressurising people back to work, but I'm sure  courses like the WEL widely available would. As would mindfulness classes, self management support- from peers as well as professionals- make some of the difference to people. I wonder if our modern approach to medicine is part of the issue at play here? A culture used to taking a pill and getting better has lost a tradition of self care. If we are to protect people's long term wellbeing we need to help them relearn this. To understand that their modern medicines will be important but will not and can never be the whole story when recovering from illness or living with long term conditions. We need a health system that recognises this and values a holistic health as well as working environments and benefits systems that prioritise long term well-being. If we don't the costs will be so much more than financial.
Reasons to be cheerful
A family weekend awaits and I'm very much looking forward to it. The book is emerging as a much more real possibility now too. It's no guarantee anyone will read it of course!
Have a good weekend all. May the sun shine on you.