Caring for each other

I’ve taken a big step this month and I’ve got help from carers, especially to let Andrew get out without worrying. I’ve found it hard. It’s an acceptance of my situation, a dependence on others, accepting strangers in to your home and that’s just the start. There’s an emotional toll I hadn’t anticipated; a rollercoaster of trust and testing patience for me at least.

I’ve decided to have direct payments but chosen to do it through an agency so I’m not acting as an employer. I didn’t quite anticipate the scale of the task if I’m honest, I was drawn to having control over what support I want.

But these times of shortage of carers that frankly is an illusion. I started out hopeful but soon learned the complexity of my needs were a stumbling point, they really want a daily/weekly commitment that fits with a business model.That’s at odds with a person-centred model and reflects that profits drive    decisions in so many of the agencies.

It took several dry runs to recruit an agency at last. I thought I had one and they failed to supply a carer three weeks in a row, telling me the afternoon before. Frankly I was angry and totally lost trust. I won’t name and names and I do believe these are exceptional times but the lack of honesty was what made me cancel the contract ( which was all loaded against the client, requiring for example one month to cancel a visit or you had to pay!).

But fortune favours the persistent and following a request through care sourcer, a website shared with me by the Occupational Therapist, resulted in a visit by the manager of an agency which puts quality care at its centre. All the agencies say that but here I’ve seen this in action. They speak a language of compassion and they really show it too. Many of them are originally from Africa or other parts of Europe and I love their warmth and care and that they bring diversity to my life which has shrunk in recent times. I found it stressful at first, having to explain so much and seek the right balance for us all. But it gets easier and they bring cheer and kindness too. What’s not to like.

I remain on chemotherapy but haunted by bladder infections which take me up and down a ladder of well-being ( more down really). I’m beginning to wonder if I can keep this going. In the main the team in the chemotherapy ward are great, quietly efficient and thoughtful but we met the exception to that last week.

And it’s an issue so many disabled people will recognise when they interact with healthcare, the people who think they know better than you and your carer do about how you mobilise and function. A sort of nursesplaining( I’m very experienced a phrase that was used when they clumsily tried to help me into a chair). They made me have a minor panic, standing right in front of me, rather than asking what I needed. They then bossed around Andrew like he didn’t know what to do either. We were both angry and it damaged trust ( that word again)and kindness was sorely missing. She apologised in a fashion and I suggested we start again. I think after that she did her best but really it wasn’t good enough on a ward when there is so much vulnerability. I found myself feeling sorry for her, sensing she knew she was falling short.

But the reassuring thing was that she was an exception and that reflects well on those who do it well most of the time. It’s a busy and relentlessly emotional place to work ( and to be in as a patient), kindness and care need to be the glue to hold it all together including for the team.

So this blog is to give thanks for the carers whoever they are, especially the families steadily alongside us, unsung and without reward. Thank you, all of you. 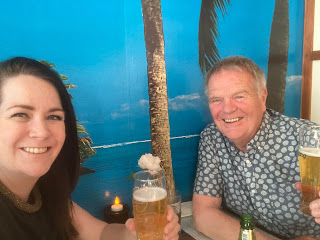