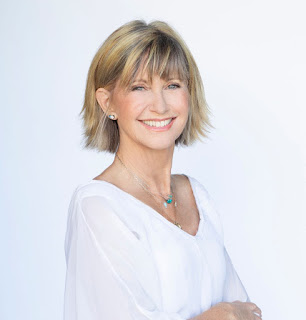 There are occasions that catch my emotions in such an unexpected way and  I was reminded of that when Olivia Newton John died recently. Of breast cancer of course. Last time I thought of her in relation to cancer was when she told the world ( and amazingly the whole world was listening) her cancer had returned but that she was going to beat it. All the war analogies followed and I felt so let down by her.

She could instead have told of her fears, the impact of treatment, even anticipatory grief but no instead for me at least it sounded like denial. Why should that matter? It could have been an opportunity to talk about when cancer returns. To talk about how it feels when the pink ribbon is no longer your symbol of recovery. To help all those people who live with metastatic disease ( when the cancer returns and is in a different part of the body) be seen and heard.

But who am I to judge others practicing denial. It’s a useful defence , just not in the long term. Her fame through the film ‘Grease’ was captured in THAT cat suit. We know female actors are so judged by their appearance that admitting vulnerability is extremely brave. And why should she be brave?

So I grieved for her and let go of my disappointment. Her legacy for me, nonetheless, will be her goodness that radiated from the screen. May she rest in peace and her beauty forever captured and celebrated.

In the years since my first diagnosis with breast cancer several famous people have died of breast cancer. I have a very visual memory of sitting at the breakfast table, listening to the news and hearing of Linda Macartney’s death. They then went on to play the theme from the Titanic. I sobbed and tried to stifle any noise that might have alerted the children to my distress. Just Robbie, the dog came his cold nose nudging my elbow. I couldn’t speak and the grief sat in my chest threatening to suffocate me.  It took me some time to fully understand that response. Because I was a George or John fan, not Paul you understand. I didn’t even cry for John like that, even though I remember what I was doing when I heard that news too. Why Linda? - I didn’t even like her sausages ( much improved since then I must say) or indeed her singing. I thought Mull of Kintyre was the last straw for me and the McCartney’s. But ultimately what finished me was the knowledge that despite her wealth and fame she was just like the rest of us. The cancer was not defeated and she died far too young and was taken from what seemed to be such a loving family. And if it took her by extension of this, it could take me from my family too and I would be powerless to change that. It was perhaps the first time I had allowed myself that truth. So Linda helped me confront that truth. She too left a great legacy not least in her commitment to vegetarianism.

But most of us won’t leave any legacy and that’s ok, it has to be. We’ve got up most days and ploughed on with treatments that are barbaric on occasion and often causing daily side effects whilst knowing you will be on them for 5-10 years or forever without knowing if they help. That takes courage and belief in your future that’s hard to sustain long term.

It’s hard when we feel we need to live up to the idols. Be they icons of the silver screen or who tackle a moonwalk or wear it pink with a determinedly cheery smile. It’s not a competition. We are just walking each other home as best we can. And that’s enough.